Every story has a beginning ... The story of the Smallest House starts in the year 1738.

This page tells the history of this special monument and its historical environment.

Learn more about the rich history of this special house by scrolling down!

The history of 'the Smallest House in Amsterdam' is related to that of the Walloon Church and the East India House.

The Walloon church is located behind the Oude Hoogstraat. The main entrance is on Oudezijds Voorburgwal. This church dates from 1409 and was originally the chapel of the Paulusbroeder monastery. The print on the left shows what the monastery must have looked like in 1409. 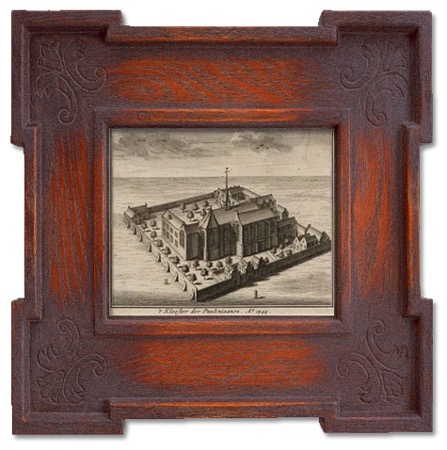 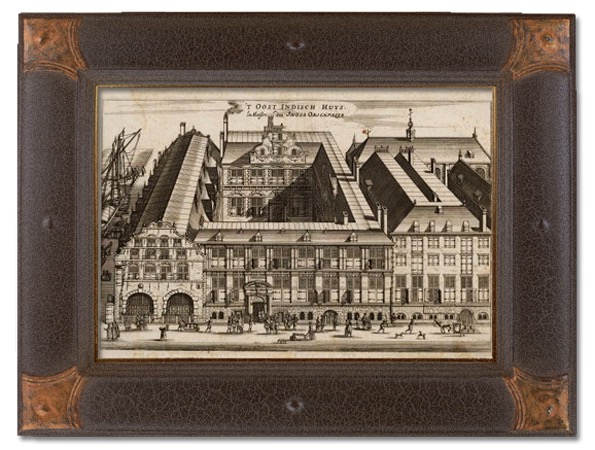 In 1603, the Amsterdam chamber of the Dutch East India Company (VOC) took possession of the Stadsbushuis on the Kloveniersburgwal and turned it into a warehouse. Two years later, the entire building was taken over by the VOC. Because there was hardly any meeting and office space available, it was decided to place a new building next to the Stadsbushuis.

This East India House was built on the spot where the orchards of the Paulusbroederkeroster used to be. The construction of this East India house was completed in 1606, as shown on the print on the right. The nice thing about this print, a front view of the East India House in the Oude Hoogstraat, is that it shows on the left the Kloveniersburgwal, one of the city walls, on which ships were stocking up on provisions. Right behind the East India House is the Walloon Church.

The alley that runs from right front to the back is the alley that is now hidden behind the Waalschekerkspoort. At a certain moment, 'the Smallest House in Amsterdam' will appear next to this gate.

Next to the small house is a well-known icon of Amsterdam, the gateway to the Walloon church. This gate, from 1616 and designed by architect Hendrik de Keyser (1565-1621), used to serve as a passage for funeral services.

The drawing on the left shows that in the original design the top ornaments were placed the other way around. The Imperial Crown and the gate of bars have disappeared over the centuries.

The skulls on both sides have also been removed at some point, but were replaced in the 1990s. However, instead of looking to the side as in 1616, the skulls look forward today. 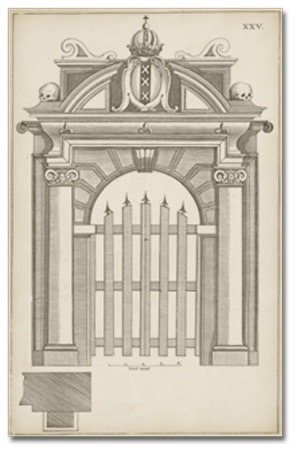 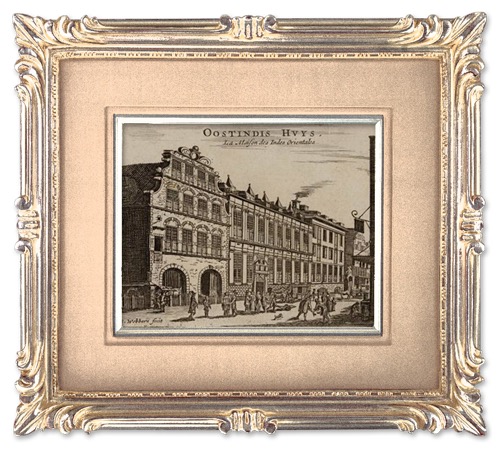 This print gives a look at the Oude Hoogstraat from the Kloveniersburgwal side. The large building on the left in the image is the former Stadsbushuis, which was demolished in 1890. Next to it is the East India House. Right next to the East India House, the gate to the Oude Waalsche church can be distinguished. Next to this gate is nowadays 'the Smallest House in Amsterdam'.

However, this print, from the year 1664, does not yet show this. There is a large house next to the gate. It is suspected that this house has at some point been replaced by the current house numbers 20 and 22.

Here we see the Oude Hoogstraat from the Kloveniersburgwal again, but now 56 years later. The situation is even more visible on this print. The gate to the Walloon Church is depicted in the right corner.

The house to the right of it no longer exists. Here is now the 'Smallest House in Amsterdam'. 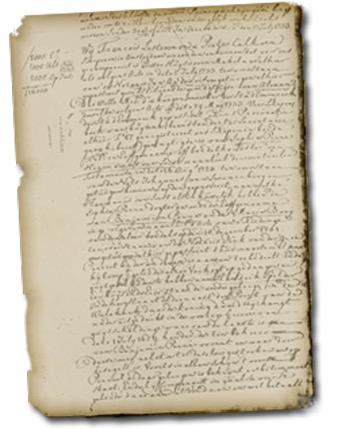 The document on the right shows that the building with the name 'The King David', which still was standing on the site of the current 'Smallest House in Amsterdam' in 1733, is sold by the Van Soest family to the Spelder family.

'The King David' was probably demolished the year before, to make way for the current building at Oude Hoogstraat 20.

The remaining plot went to 'De Stadt', which, a few years later, builds a single-storey house on it. 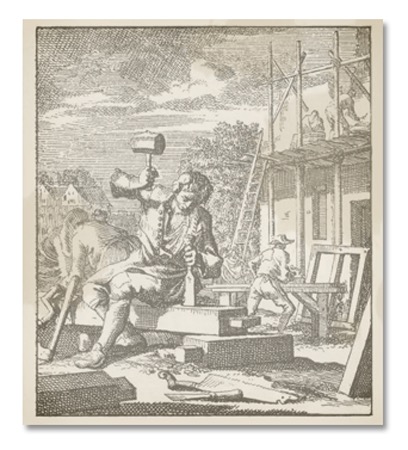 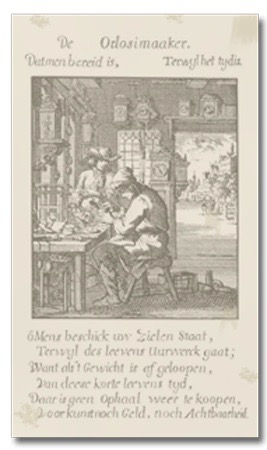 Although there is no print available showing the house, the Amsterdam City Archives have shown that it was leased to a maker of grandfather clocks in 1742. This J. Tenking paid a rent of 150 guilders per year for this.

The picture with poem shown here, from the book 'Het Menselyk Bedryf' (1694) by Jan Luyken and his son Caspar, gives a good impression of a watchmaker from this time.

This print from 1767 shows for the first time 'the Smallest House in Amsterdam'. The print gives a view of the Oude Hoogstraat from the Kloveniersburgwal side. On the corner is the former Stadsbushuis and also the East India House.

There is a small house next to the gate of the Walloon Church. This is Oude Hoogstraat 22. It is shown in only a few sketch lines.

At the time it was even smaller than it is now: a tiny, single-storey house. The 3 floors had not yet been build. Next to the house is also a 'new' building; the current Oude Hoogstraat 20. 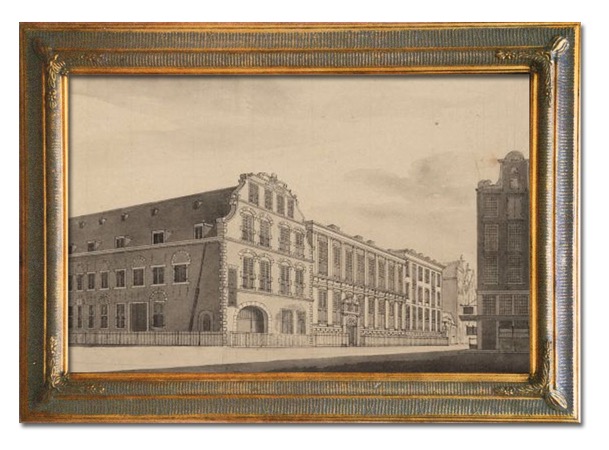 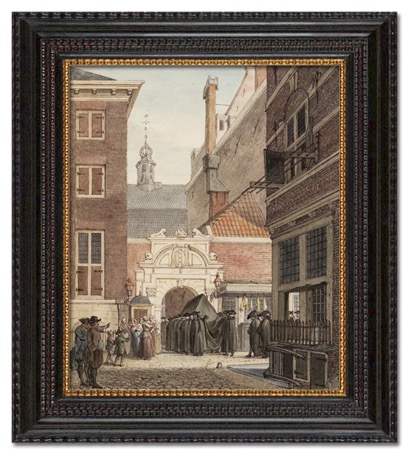 This print from 1768 by Reinier Vinkeles contains very special elements. From the Bethaniëndwarsstraat, 'the Smallest House in Amsterdam' is clearly visible for the first time. It is clear that the ground floor building was a craftsman's workshop.

Work is done inside, the trade is outside for sale. Was it a shoemaker? A tailor? Or a hatter? In addition, we see a funeral procession that enters the gate of the Walloon Church.

The tower of the church is visible in the background. On the left of the print again the East India House. Right in the foreground Oude Hoogstraat 19 where a bakery was located at the time

The Oude Hoogstraat was a particularly lively street in the 18th century and gave direct access to the city walls from the Dam Square. People from very different backgrounds passed through the street: from sailors to captains, who were on their way to the East India House. Housekeepers who did groceries at the bakery or butcher. Traders inspecting their warehouses or settling cases at the inn while enjoying a pipe.

The print on the left (R. Vinkeles) is like a photo of the Oude Hoogstraat from the year 1768. Taken from the corner of the Betaniëndwarsstraat, towards the Kloveniersburgwal. On the right the East India House and on the left a wine shop and an inn. 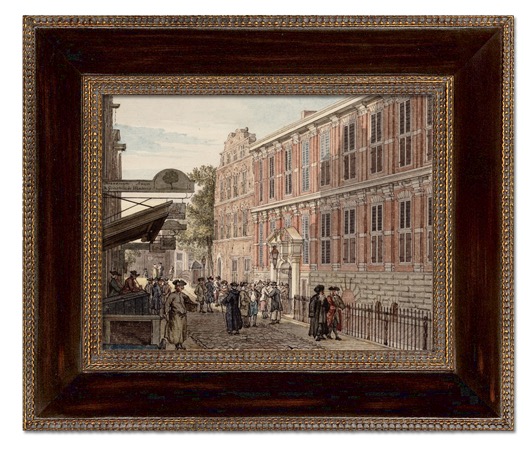 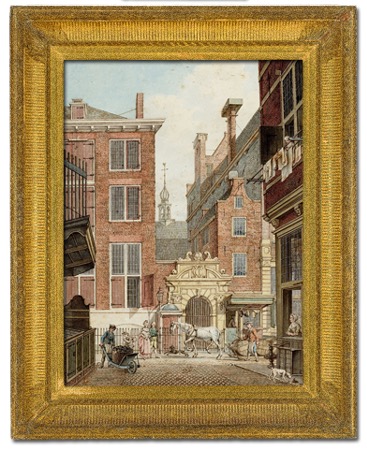 This print by draftsman Hermanus Petrus Schouten from 1787 is the first image of the house on which the 3 floors and the characteristic bell gable can be seen. This means that an extension took place between 1768 and 1787.

The house became a miniature edition of the stately canal houses for which Amsterdam is so famous. We see the house again from the Bethaniëndwarsstraat. It is remarkable that there are 2 windows in the side wall. Windows that are removed at some point in the 20th century.

We take a leap in time and switch from prints to photos! Unfortunately, there are no prints, photos or other representations of the house known from the 19th century to date.

This 1906 photograph of George Hendrik Breitner, a so-called glass negative, gives a nice picture of the Oude Hoogstraat from about a hundred years ago. Left, the pillar of the entrance of the East Indies House. 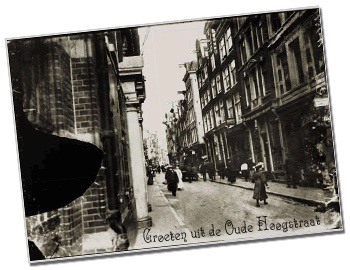 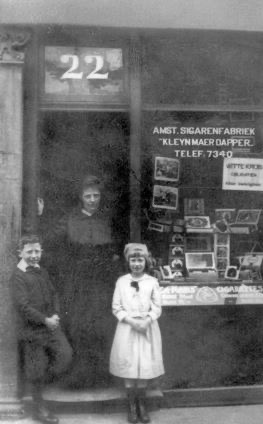 History comes alive ... A while ago we received a beautiful photo and mail from Mr Esselaar in which he talked about the Smallest House in Amsterdam ...

My father once lived in that house with his mother and sister. My grandfather had run off with the maid and left his wife and children unkempt.

Yes yes those were the days! My grandmother had a tiny cigar shop. The photo dates from about 1918 ...

My father used to tell us about that hard time.

He and his sister always got a 'newspaper' when they went to school, which they had to lose somewhere. Because there was no toilet ...

The Esselaar family was also the last family to live here. The house had been declared uninhabitable for nearly 70 years.

This photo shows 'the smallest house in Amsterdam' in 1938. The foundation of the house was laid 200 years ago. Johan van Bruggen is standing in the doorway. From 1936 to 1962, he owned a jewelry store in the cottage.

The windows in the side wall are still present. However, in 1941, after the third break-in, the windows are bricked up. The skulls that were always on either side of the gate have been removed. Where have these gone? 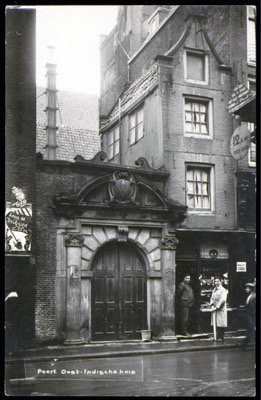 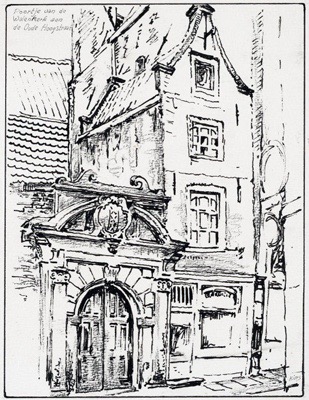 In the period 1945-1975, Mr. P.H. Kiers (1898-1984) monthly drawings of monuments, bridges, courtyards, gates, etc. made for a monthly magazine of the Nederlandsche Bank. In 1959 the honour fell to 'the Smallest House in Amsterdam' and the Waalenpoort.

6 years later ... now the jeweler has made way for an arts and crafts shop, called 'Het Spiegheltje' (The Little Mirror). The photos on the right give a unique look into the interior of the time. The photo of the building itself shows that the windows in the side wall have since disappeared. But ... the skulls that were always on either side of the Waalsekerkspoort have gone back! 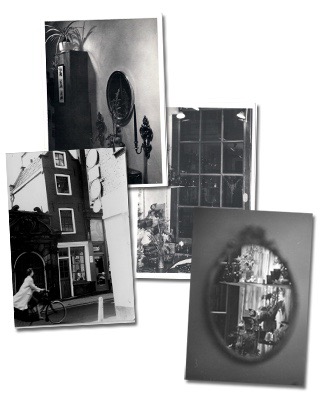 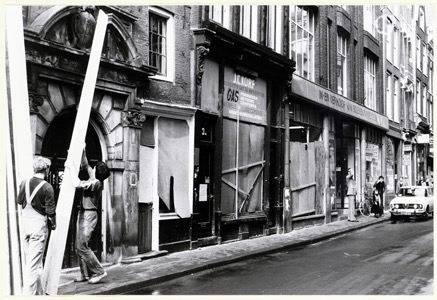 On April 30 this year, Queen Juliana will be abducted in favor of her daughter. During the inauguration of Queen Beatrix in the Nieuwe Kerk, major squatter riots broke out in the city.

As you can see in the picture, the house was also one of the many victims of these riots.

All three floors were used as a shop. 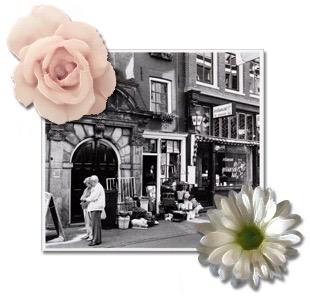 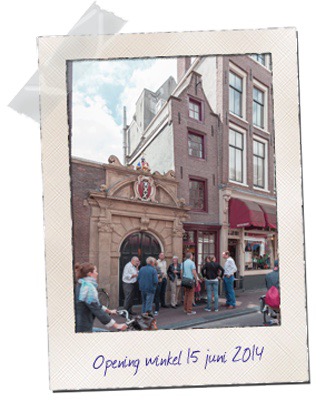 The house has served as a home for the past 12 years. On June 15, 2014, 276 years after the start of the first store, the smallest tea shop in Amsterdam will be festively opened at this location.

In 8 years, the tea shop, the smallest house, houses the largest tea collection in Amsterdam.

Are you interested in more history about the Smallest House in Amsterdam? Book a table in one of our tea rooms. We are more than happy to tell you all about it.

TO THE TEA ROOMS