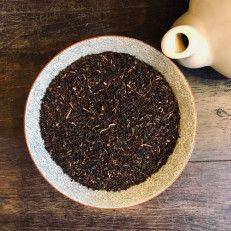 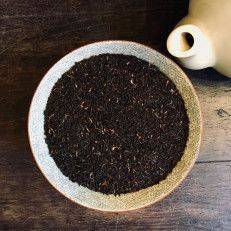 In the West, we speak of black tea, but the Chinese are talking about red tea. Referring to the red color that is released during the infusion of black tea.

Black tea is just as green and white tea made from the leaves of Camillia Sinensis. It is not clear exactly when black tea made its entry into the Chinese tea culture. But we can assume that after many years of experimenting with the production of tea, the black tea variations was born.

Black tea undergoes a longer oxidation process than green or white tea. This allows the flavor to intensify and it extends the expiration date of tea. Black tea contains, in general, also more  caffeine than other teas.

Until the late 19th century, black tea, in compressed form, was used as currency in countries such as Mongolia, Tibet and Siberia.

Black teas are mainly produced in India, Turkey and Kenya. After picking the tea leaves, the leaves are wilted and then rolled or bruised. The released juices and enzymes can then be oxidized through the use of air. The tea leaves turn slowly to dark brown / black.

Black tea can withstand hot water better than green or white tea. The average temperature of water should be between 90ºC - or 100ºC before it is poured over the tea leaves.

The average brewing time for black tea is between 1 and 3 minutes.

On the information sheet of the tea you can find the desired water temperature and brewing time.

What many people do not know, is that you can brew the leaves of black tea multiple times. You will notice that every time the tea will taste slightly different!